Al Qaeda No 2 release video on "end of the West"; some disturbia in the links 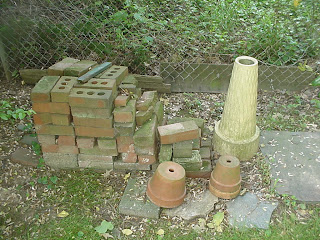 On July 4 CNN “World” released a story about a new 94 minute video from Ayman Al-Zawahiri, the Egyptian “doctor” (famous for the 1981 "We are Muslims!" jailhouse chant and rant) who is second in command under Osama bin Laden and in hiding somewhere. The video is called “The Advice of One Concerned” and supposedly predicts the end of the West and the eventual forced conversion of everyone to Islam, an idea that the Pope used to called Islam “irrational.” The story is called “Al Qaeda No. 2 says end of the West is imminent, video shows.” The link is here.

Although I review beaucoup movies and "videos", I would hardly want to watch this. Remember the horrible and menacing broadcast from Osama bin Laden on Oct. 7, 2001, the Sunday that Bush ordered the invasion of Afghanistan – or the self-indulgent video that he released on Dec. 13, 2001 – the day of my layoff – where he gloats about the falling of the Twin Towers. Of course, the video can provide clues as to the whereabouts and situation of bin Laden and Zawahiri.

For a while, the CNN page featured an advertising link to a Christian “end of times” sponsored page “Secrets of Survival”, link here. That page gave subsequent links to news stories that take the threat of nuclear terror quite seriously. There is a blog called "The Swamp" in the Chicago Tribune (link here) Cheney: Nuclear terrorist attack inside the U.S. "a very real threat'' by Mark Silva, who asks what has changed Dick Cheney during the two terms and quotes:
'' And the stakes of terrorist threats that the United States faces today have only increased since then,” calling fear of the detonation of a nuclear weapon inside an American city "a very real threat.... It's something that we have to worry about and defeat every single day. ''.

The New York Times had a Strangelove-like op-ed by By William J. Perry, Ashton B. Carter and Michael M. May, June 12, 2007, “After the Bomb,” arguing that it is time to discuss how to prepare for this. The article poses some horrible scenarios, like going back into radiation stricken areas to find loved ones. Even a “dirty bomb” could make large areas of real estate uninhabitable and economically worthless for decades.

A world in which something like this really happens on domestic soil has little use for a "spoiled" introverted pseudo-geek like me. But, of course, this grizzly possibility (as do threats like pandemics and cataclysms associated with global warming) has led some to argue for the end of individualism and a new willingness to accept personal "interdependence." Whatever the carbon efficiency of high density living, it does expose city dwellers to certain horrific risks. (Hence the 1970s preoccupation in some religious circles with "small town real estate").

The newspaper links here may require that the visitor register as a user and sometimes purchase content.
Posted by Bill Boushka at 5:58 AM No comments: Links to this post