On Wednesday night, Jan. 12, the History Channel aired a two hour documentary “Megaquake 10.0”, which is much in the tradition of its earlier Megadisaster series.
The film examined the types of faults that lead to earthquakes (normal, thrust, strike-slip, and subduction), and theorized that each type of fault has a “speed limit”. In California, the speed limit is probably that of an 8.5 quake.
The Richter Scale has actually been replaced by a “Moment Magnitude” Scale, where every point is a 30-fold increase in power.
There is a theory which says that if all the major subduction faults linked up across the Pacific, a 10.4 quake might be possible.  But the largest known quake in history occurred in Chile in 1960 (a 9.5), and the Alaska quake in 1964 was a 9.2    It would be possible for faults in California to link up and for a single quake to destroy both San Francisco and Los Angeles.  Other cities exposed to possible total destruction include Mexico City, Tokyo, and Tehran.
The area of the US most exposed to a possible 10.0 subduction quake would be the Pacific Northwest, the Seattle area. A large tsunami would occur around the Pacific, also.
The film simulated the damage that might occur in a number of quake situations, with whole skyscrapers (such as one in downtown LA) toppling over.
It also provided a discussion on the New Madrid dimple and predicted the destruction that could occur in the Midwest should another similar quake appear today.
Earthquakes might not be able to match supervolcanos or asteroids in the potential for destruction. But asteroids we can see coming.
Here is History Channel's feedback site on the film.
The Discovery Channel has a similar video on YouTube saying that there is a 1 in 3 chance that a megaquake will hit the Pacific Northwest in the next 50 years.
Wikipedia attribution link for USGS diagram of fault types, here.
Posted by Bill Boushka at 7:17 AM No comments: 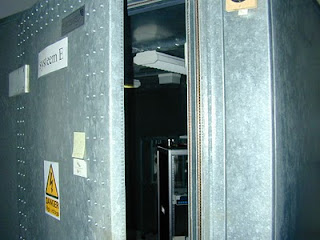 "EMP/Solar Storm and Faraday Cage, How to Make, Maybe", is a Youtube video, from OBXSOLWIND, is a ten minute YouTube video, typical of what one finds for “Faraday Cage”. The owner, an engineer, shoes his system near the North Carolina Coast. He says, don’t put things in straight lines, and ground everything properly. He says his system of “containerizing” his electrical system (off his solar panels) is not expensive if you can do your own work. And he says he won’t show everything.

Very little has appeared in the popular media so far about what homeowners could do to protect their own electronics from a Carrington-style coronal mass ejection (solar storm) or possibly an EMP attack, on the ground or from a high altitude nuclear blast.

Wikipedia attribution link for picture of a Dutch Faraday Cage room. Looks like it belongs in a black-and-white film noir!
Posted by Bill Boushka at 8:10 PM No comments: