PBS Nova: Manhunt: How facial recognition and infrared surveillance technology set a dragnet in Boston after the Marathon tragedy 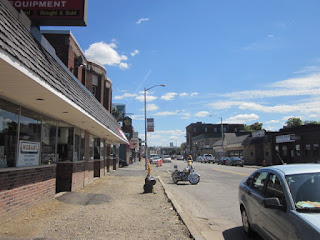 PBS Nova on Wednesday, May 29 aired a compelling 55-minute documentary “Manhunt: Boston Bombers”, where the use of technology created a dragnet for the Tsarnaev brothers that they probably did not envision.

More interesting was the aerial infrared surveillance, which was able to show cigarette butts on the ground from an altitude of 5000 feet.  In fact, infrared had spotted Johar’s image in the boat shortly after police got the call from the homeowners.

The film also explained some of the technology of facial recognition and progressive matching.  This is much more accurate than eyewitness identification, where it is often easy to confuse similar faces of people you don’t know that well.

The link for the program is here.

Maybe 30% of the footage in this film came from the air – very impressive.

HBO and CNN: "Manhunt: The Inside Story of the Hunt for bin Laden" 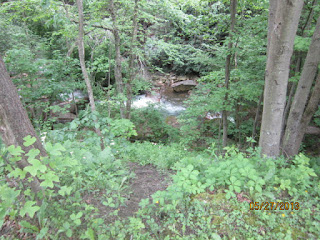 CNN and HBO have collaborated to air the documentary by Greg Barker of Peter Bergen’s book on the eend of Bin Laden.  The film is called, “Manhunt: The Inside Story of the Hunt for bin Laden.”  The book is titled “Manhunt: The Ten Year Search for bin Laden, from 9/11 to Abbottabad.” Published by Broadway in 2012.
The opening of the film talks about how women make good intelligence analysts.

Then the film describes the symbolic character “Alec Station” as a combination of the analytic and field operational aspects of CIA work.
It moves to Peter Bergen’s description of his 1997 interview with Osama bin Laden in a secret place in Afghanistan, where bin Laden threatened to attack America because of its policies in Arab lands. Bergen offers a comparison:  what if Japan had threatened the US verbally in 1937?
The film covers the early months of 2001, as the warning signs started to come in.  The film describes what the offices where analysts work at the CIA (Langley and other buildings) looks like (not that remarkable), and then recounts the morning of 9/11. There was a fear that a plane might hit the Langley headquarters or other facilities.  Employees stood their ground.

Linda Stats has a TV review for the New York Post here.

CNN has its own description of the “film” as a kind of feminist epic here, partly because of the underground work of "Jennifer Matthews", who gave her life in a meeting leading to a suicide attack in 2008.  .
HBO’s own site his here.

The film, which redisplays its title at every commercial break, consists largely of individual accounts from agents of the course of the investigation, following other terrorists (some of them gratuitous) and eventually the courier in the “Zero Dark Thirty” film (Movies blog, Jan. 11, 2013). The film also accounts the recruitment of a man who worked as both a doctor and as an underground blogger,  The doctor eventually treats the number #2 man in Al Qaeda.

The documentary makes the point that Osama bin Laden tried very hard to live as long as possible, even though he preached that martyrdom for Allah would be rewarded and was unbelievably efficient in his fanaticism until 9/11.

It also makes the point that the US intelligence system "works" because it can take the necessary risks when it really has to -- which is not all the time.

Posted by Bill Boushka at 12:47 PM No comments: 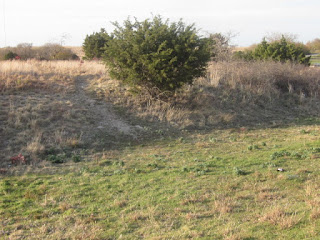 On Saturday night, May 25, 2013, Anderson Cooper aired “Storm Hunters: In the Path of Disaster” on CNN.
Some of the footage was from 2011 storms, but it was updated for the Moore, OK tornado (there had been similar storms in the area in 1999 and 2003; it seems to be one of the most vulnerable spots in the nation because of geography).

One of the biggest controversies has been the fact that most homes in Oklahoma and the southern plains don’t have basements, and that homeowners don’t think it’s worth the money to have them (costs about $6000 to build a storm shelter).

But an underground shelter can protect self and neighbors.  A homeowner could put copies of major documents, photos, and computer files, and spare electronics (laptops with software and hard drviers refreshed with backup materials), and take essential stuff with him (and family) to a hotel (although the car might be lost).  One important fact is that sometimes there is very little warning even for large tornadoes, which can pop suddenly when the atmosphere is explosively unstable.

Two of the elementary schools in OK did not have shelters.

CNN does not appear to have a coherent summarily of the documentary, as it keeps changing. There is a new story about the Jonas Brothers helping the victims (as hands-on volunteers?) , here.
Anderson Cooper has sometimes been in the wrong place at the wrong time. On Saturday, September 15  2008 (approximately), Cooper was waiting in a flood created by Hurricane Rita in East Texas.  The next day, the financial crisis broke in NYC.

Posted by Bill Boushka at 9:38 AM No comments: 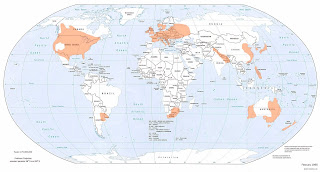 Nick Wittgen has a “short film” on the “May’s 10 Worst Tornado Outbreaks” in the US, some of it quite graphic, with a lot of explanation, here.
It starts with tornadoes in California and then Italy.

The film comprises many little videos, each preceded by a commercial.
There is a video that asks “Has Tornado Alley Moved?”  There is some sense that it has tended to shift east, and that the southeast, east of the Appalachians as far north  as the Virginia Tidewater, has tended to become riskier.

The fourth and fifth deadliest tornadoes in history were spawned in Tupelo, MS in 1936, and in the 1930s two tornadoes actually collided in Gainesville, GA.

There’s a video that analyzes the 2012 tornado outbreak.  Another shows damage from the two largest in 2011, Tuscaloosa and Joplin.

May is typically the most “dangerous” month, because warm humid air from the Gulf can get hot, whereas there is still some very cold air in the Rockies that can collide with it, causing explosively unstable air.
Tornadoes do occur near Washington DC, but the most severe storms tend to occur on the lower Potomac and move northeast over the Dalmarva, or northwest of the City in Frederick county , MD, possibly because of the Bernoulli effect of the Harpers Ferry Gap to the southwest.  The Blue Ridge has a mixed effect on the severity of storms, making them more severe in some locations (like Culpeper)  relative to the mountain gaps, and less in others.  But there was an F4 tornado in Frostburg, MD, in the Allegehenies, in 1998 (very rare for the area), and another in La Plata, in southern MD, in 2002, in an area that is flat, near water, and more exposed.
The Weather Channel link is here.  It seems that it is getting updated.

Note that Accuweather weighs in on the cool April and May for 2013, actually reducing tornadoes so far. The link is here. When I was a boy, we typically hit 80 degrees in Arlington in early May, and 90 by late May, but often had strong cold fronts that would drop the highs for following days to 60.  Heavy spring thunderstorms were frequent in the 1950s, but less destructive, because the tree canopy was not as high and there wasn't as much development.

This has been a terrible period for the southern plains, especially around Granbury, TX (where I almost got an IT contract with Texas Energy in 1988), and today south of Oklahoma City, in Moore, which I have driven through on I35 many times.  The area where I35 runs was hit by an F5 in 1999, with 300 mph winds, the strong surface winds ever measured on Earth.  (On Neptune, they are 900 mph.)

Posted by Bill Boushka at 5:08 PM No comments: 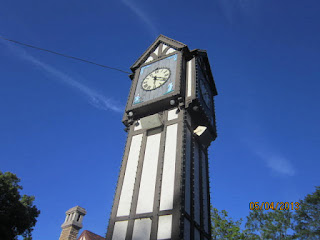 The penultimate episode of ABC's "Revenge" for the spring of 2013, called "Engagement", ended with a massive power blackout from New York City to at least the Hamptons on Long Island.

It came upon suddenly over about five seconds.

Who did it?  Emily? Victoria? Nolan? (I doubt it.) Or that Lizbeth ("Dragon Tattoo") girl that Nolan caugh (and whom he was supposed to bail out of jail)?  That sounds more likely?

Is this a cross with "Revolution"?  Well, in the NBC series, the power blackout was caused by "nanobot" viruses in the air, an idea that makes no sense in physics.  But conventional EMP does make a lot of sense to physicists.

Or was it a massive solar storm?  Maybe.  A solar storm could cause massive power outages would be less likely to bamboozle electronics already turned off.

If it's EMP, then Nolan's computers are all wiped out, and the new world order will have no use for him.  Pardon,. Nolan proved his seamanship was pretty good a few episodes ago. But remember when sister Emily asked "Can you really do this?"

Remember, also, that 'FlashForward" on ABC featured a blackout (looking into the future) based on an idea of quantum physics.

The two-hour finale of "Revenge" will be called "Truth".  That's the "Eternal Feminine".

Posted by Bill Boushka at 7:28 PM No comments: 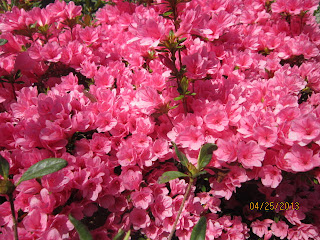 The documentary is directed by Michael Kirk, and interviews reporter Dana Priest, and Bush security consultant J. Cofer Black, and talks about the CIA project after 9/11 called “Graystone”.
I don’t recall, from the earlier show, the emphasis on the tremendous amount of space underground, down to ten floors, that the intelligence community has built in the greater DC and Baltimore areas since 9/11.
The documentary also stresses the passing of authority for strikes from the CIA directly to the military, where presidential approval is not necessarily required.
The mingling of military and civilian jobs in the intelligence area becomes even more interesting, and could have presented more issues during the days of the “don’t ask don’t tell” policy.
The new PBS link for the show, which was aired 10 PM Tuesday and pre-empted “Never Forget to Lie”, is here.

Posted by Bill Boushka at 12:51 PM No comments: