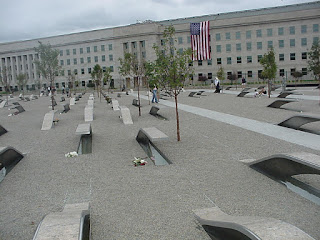 On Sept. 6, WETA aired “9/11: Inside the Pentagon”(directed by Sharon Petzold, Lone Wolf Films) and it was re-aired on may PBS stations tonight.  Be best link is here (through Oct. 4) or here .
.
The documentary showed unprecedented footage of the inside of the Pentagon on 9/11 as well as interviewing many survivors, including the building manager, and a female Army officer. 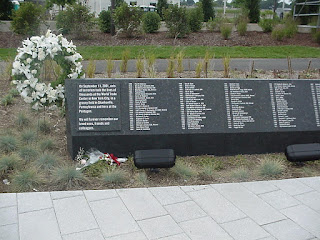 The Pentagon fire trucks were unable to respond because of damage in the attacks, and the first effective response came from Arlington County in Crystal City.  The enemy conducted the attack so as to compromise conventional first response.

People doing the rescuing feared a second plane, and had to evacuate from their rescue work for about 5 minutes while hearing a jet fighter approach.

The fires were pretty much out of control for at least the first 2 hours and some smoldered for a few days.

People working in the Pentagon did not really suspect a plane was coming, even after the WTC attack, until the last two or three minutes.

The blast proof windows kept some people from escaping and added to the fatalities.  The Pentagon had been fortified against a more “conventional” attack but not an airplane with its jet fuel.

184 people died in the attack on the Pentagon, including some civilians. The Pentagon never "closed" during the event, and has never closed since being fully open during WWII (in 1943).  There is irony in that I spent some time (in the summer of 1968) in the Pentagon during the Vietnam era while in the Army, when it was viewed as much "safer" than combat,  Could I have responded as necessary to such a happening?

Posted by Bill Boushka at 8:04 PM No comments: Links to this post