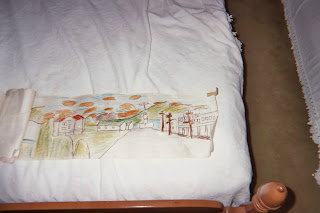 The History Channel tonight (Oct. 16, 2007) posited another version of the bird flu scare. The basic theory is that a disease like this could be seeded by comet dust, probably accumulate East of the Himalayas, settle when there are sunspots, get picked up by birds and then transfer to man. Scientist Chandra Wiksamasinghe discussed the theory of panspermia, the seeding of life from the cosmos by comets. The possibility of life on Mars is presented (with recent discoveries about aquarian channels on the Angry Red Planet -- they didn’t mention the 1996 meteorite from Mars landed in Antarctica) and the danger of bringing material back is also discussed. Life on Mars or in comet dust samples can be tested for with PCR.

The 1918 Spanish flu is discussed, with the emphasis on how it struck down the young and healthy, with lungs filling with fluid and feet and legs becoming cyanotic. The immune system went into overdrive. It seems to have been a bizarre virus. The connection with today’s avian influenza in southeast Asia was not well presented. One very interesting historical fact is that the epidemic appeared almost simultaneously in Boston and Bombay, decades before air travel was common, an observation that could support extraterrestrial origin.

The last few minutes of the film presented the hypothetical course of an explosive epidemic of H5N1 bird flu or something similar. (Get real? Does Chandra really believe H5N1 itself came from comet dust? He says that SARS could have.) . There is some sloppy discussion that suggests that both bacteria and viruses together could travel on comet dust and be spread explosively in an epidemic. H5N1 is a virus, not a bacterium.

The concept reminds me of the 1971 film The Andromeda Strain (mentioned) based on Michael Crichton’s book, directed by Robert Wise. In that movie the five scientists go through “body analysis” and then the photoflash chamber, with almost complete body depilation (on camera once) before admission to the Project Wildfire lab. Will hospital infection control ever reach these measures? No man would become a surgeon.

The History Channel film on an avian influenza epidemic was discussed Sept 15 here:
Posted by Bill Boushka at 7:52 PM