Homemade video of a fictitious mega-disaster: Cloverfield (there are real ideas here) 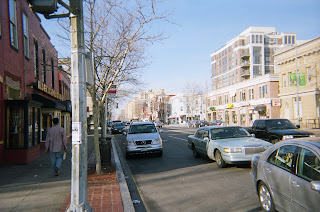 Cloverfield, dir. Matt Reeves, released Jan. 18, 2008, for the New Year, rightfully belongs on the Paramount Classics or Vantage list (there have already been several important films late in 2007 from Vantage) because it really is an art film (made by Bad Robot, with the film title coming from a neighborhood street, although it sounds like the name of a Central Park Meadow) about amateur movies and about 50’s style “Asian” monster movies, in some lattice combination. The soundtrack sizzles, with, for the closing credits, a great concert overture by Michael Giacchino in G Minor called “Roar” with a 5 note theme g-g-Bfat-a-Bflat, wandering around in half-steps, in real sonata form. (It would work by itself in a symphony orchestra concert.)

Of course, everyone knows the gimmick by now. Some yuppie likable post-college kids (already CEO’s of their international Internet companies a la Myspace, probably) get together for a going away party for one of the guys headed for Japan (hint, home of the monster movie). The other kids are documenting the event on home video for him. The opening 20 minutes of the movie are pretty much real time (except for a quick Sunday morning (a la Benjamin Britten) prologue that may be near the old Seaside Courts (paddleball) near Coney Island) as of you could make a Sundance film out of a party video. You probably can. The conversations build up quickly, and if you didn’t know what this film is, you might think this could be an interesting “you are there” art film. (Please, not “Full Frontal” (2002)). Then, there is a roar and a shake as the kids are near the bar, near the balcony, and they can look outside. Pretty soon they are turning on to CNN’s Breaking News, and it seems that there has been an earthquake in lower Manhattan – a good premise, because that really can happen – and an oil tanker has ruptures in NY Harbor. Again, that’s a pretty good premise for History Channel mega-disasters. (There are big tankers there: I remember seeing one from 99 Wall Street while working for Bradford in 1977, where we could see the East River). Well, the destruction gets really bad quickly. Here, you wonder for a while just how the media would cover what sounds like a rerun of 9/11, except that it is really much worse already (if that can be imagined). There simply is no place to run.

The last half of the movie does pay homage to “The Beast from 20000 Fathoms,” “It Came from Beneath the Sea,” “The Giant Behemoth,” “Them”, even the 70s short "Bambi v. Godzilla". And don't forget the Korean film "The Host" and the Japanese "Pulse" (remade in the U.S.). We get to see the "tadpole" monster in increasingly uncompromising shots, and yet the media doesn’t cover it. But it doesn’t take the military long to start attacking it, and announce “Operation Hammer Down,” abandoning Manhattan forever. The behemoth generates arthropod babies that chase the people further. The kids keep documenting their demise to the very end for others to find. You can say, what a way to make a movie. Film your worst calamity.

The film is shot 1.85 to 1 to look like video, although the actual photography looks entirely professional, even if it is supposed to show the world from the Dogme 95, handheld style.

There is a 1999 TV miniseries, 170 min (4 hours elapsed on TV), directed by Mikael Solamon, novel by Chuck Scarborough, "Aftershock: Earthquake in New York". It airs on ION Cable on Jan. 20, 2008. As it unfolds, it seems like an overlong "Cloverfield" without the ingenuity of presentation (and without being a monster movie). It's the typical disaster movie with many little intersecting survival stories, but Manhattan is pretty much destroyed. A year later, though, it's on its way back. The WTC survives in this pre-9/11 prophecy. Netflix shows a Save status for the DVD, so it may come out soon. This blog discussed a History Channel film for a NYC earthquake scenario Oct 23, 2007 (see archives).

A story on CNN "Scary Viewers Making Viewers Sick" reports that some moviegoers experience motion sickness and nausea from the rapid uneven movement of the handheld cameras in the film "Cloverfield". I did not have any discomfort at all, but I've gotten used to "Dogme" like camera work, and this seems to be an individual variation. The story is here.
Posted by Bill Boushka at 6:36 PM