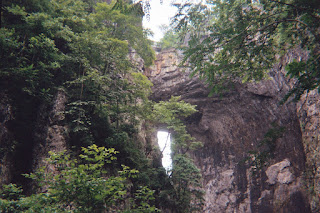 On Monday, Jan. 21, 2008, The History Channel aired its highly promoted documentary "Life After People," link here. The film supposes that one day, at some precise point in time, all humans on Earth simply vanish. It traces in increments in time the decay of the remnants of civilization to the point in some hundreds of years most of the vestiges of civilizations have crumbled. The same thing has happened with ancient civilizations of the past. Most of what the Maya built crumbled in a thousand years. In fact, the ultimate destruction by nature of remnants supports speculations that extra-terrestrials could have built early civilizations or seeded ours and then disappeared. (The upcoming movie 10000 BC, according to previews, shows a civilization that is surprisingly sophisticated.) There is a period of time when highrise cities are grown over and some animals fare particularly well, such as descendants of house cats. A few monuments of civilization, like the Pyramids in Egypt and the Great Wall of China, last for millennia.

The filmmakers obviously invested a lot in CGI affects to show the gradual deterioration of physical infrastructure, which in time becomes quite overwhelming.

Of course, there is no way people could simply disappear without most other higher animals going, too. A gamma ray burst would take some weeks to kill everyone, but would kill most animals. The same is true of most other extinction scenarios, like a massive asteroid or comet hit, or even a significant black hole (however unlikely), or the effect of a nuclear winter.

The film speculates at the end whether radio signals would reach a distant civilization, but they disintegrate into noise in about a light year. Future intelligences that replace us might not develop a reflective culture with language like we did. Consider the dolphins.

The film seems like an appropriate broadcast the same weekend that "Cloverfield" opened. In fact, clover is one of the grasses most likely to infiltrate urban areas immediately after people are gone.
Posted by Bill Boushka at 7:47 PM

As I was watching the special I presumed that there was some sort of disease that wiped out humans only, sparing plant and animal life. It's an easier explanation than most other catastrophes.

However, the point of the special was to examine how the world would adapt if humans ceased to exist. As they said, the point wasn't how homo sapiens died, but rather, what happens afterwards.