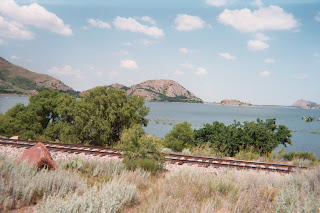 Saturday afternoon, May 24, from about 3:45 PM EDT (2:45 CDT) until the present, CNN has been providing breaking news coverage of at least two tornadoes as they drop in and out of a wall cloud in the Enid, OK area and farther east.

The link (including a video) is here. Viewers with cable access who tune in now (4:20 EDT) can watch the event live. The contents of the link are likely to change with time, and more video is likely to be added as the storm progresses.

The broadcast has shown a wall cloud, with NW (mostly upper level) and SE winds (from the Gulf of Mexico, at lower levels) brushing into each other, forming a rotating “singularity” that drops to the ground in rotation. Often the tornado has been pencil think and ribbon-like, and curved. One pig farm was hit, and so was one power transformer, but no other damage to manmade structures has developed as the breaking news broadcast progressed. Most of the photography has been taken from a helicopter two miles away. The broadcast seems to come from a local television station in Oklahoma City.

Sometimes there is a ribbon from the tornado on the ground that cannot be seen at a distance. The ground effect changes color with the contents, and may turn white with a narrow waterspout when hitting a farm pond.

Residents in the Central Plains should stay tuned for local alerts, watch this broadcast if possible, or look at weather.com maps.

It’s unusual to see live coverage of tornadoes as they form. There is an IMAX film from National Geographic, “Forces of Nature” that shows tornadoes (I have not seen it yet).