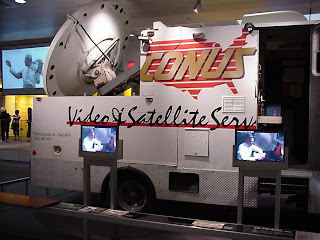 Well, as if hurricane were not enough, now we can talk about hypercane. This is a postulated super-storm, intermediate in size between a tornado and hurricane, and eyewall speeds of up to 700 mph, extending 20 miles, into the stratosphere, and eventually capable of “eating” the ozone layer.

The film “The Day After Tomorrow” had postulated an arctic superstorm coming down from the poles because of disruption of the Gulf Stream by glacier melt, but the hypercane might result as a result of an asteroid strike. A hypothesis of this film is that the asteroid hit near Yucatan 65 million years ago triggered a series of hypercanes that destroyed the ozone layer, letting in ultraviolet light that destroyed all life above ground, including the dinosaurs. Small animals that could hide underground survived, and this gave mammals a chance. Without the asteroid hit, we wouldn’t even be here.

All of this was outlined tonight in the History Channel Mega-Disasters film “Hypercane.” The physics of the storms was discussed. It takes a water surface temperature of 120 degrees F to generate one. The mathematics of the storms involved complex variables and the kinds of equations in math class that have no solution in real space – singularities, where physics changes. The destructive force of a low-pressure storm varies as the cube of the wind speed.

There is some concern that water near volcanic activity could get hot enough to generate hypercanic activity, and there was mention of particular concern about the Red Sea (which parted for Moses).

You wonder it the storms on the gas giants are like hypercanes, but they are much larger.
Posted by Bill Boushka at 7:30 PM