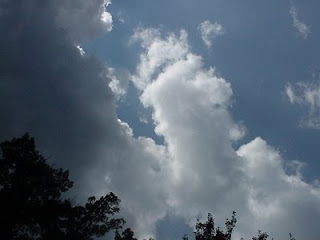 The Discovery Channel “Storm Chasers” presented a four one hour (probably repeat) segments about the work of Shawn Craig chasing tornadoes from Texas to Kansas.

He (along with Josh Horman) designs a tank, actually welding some of it himself, capable of withstanding being inside an F4 or F5 tornado. An IMAX camera is placed inside the tank. He and his team do practice runs with truck imitating the path of a fictitious tornado.

He just misses a big tornado near Tulia, Texas that devastates the town with 135 mph winds.

The show demonstrates the 3-d graphs of the mesocyclones in clouds that drop tornadoes.

After many misses, they finally sit in the path of an early evening Kansas storm that passes over with 200 mph winds. The show still breaks up during the “Passover.”

In subsequent episodes the hunts continue. But one of the vehicles has a major breakdown, needing $3000 repairs to the clutch and transmission. The men, running low on money, double up on motel rooms and make a joke about “Brokeback Mountain” (“I’m going to quit you.”) On the last day of a storm season they drive on empty stomachs to a storm in SE Kansas and film the middle of an F1 tornado.

One of the episodes shows Greenberg, KS devastation. There is a video that covers many of these tornados, previewed on YouTube here.
Posted by Bill Boushka at 8:35 PM