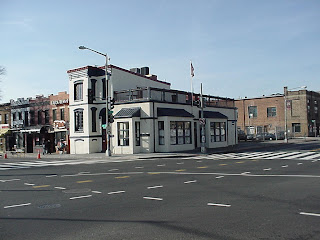 In the fall of 2003, theater chains (especially National Amusements) and public places like the Washington DC Metro started advertising the quasi-real-time drama “24” on Fox, which would take our fictitious government minute-by-minute through various terrorist response scenarios.

The seventh season did not start until Sunday Jan 4, since the WGA Writer’s strike delayed production by Fox.

But the situation in the first two hours (which I finally got to playing today) is a corker. Allison Taylor (Cherry Jones) is our first female president, and was apparently elected on a “do not negotiate” platform. She is like a humorless Sarah Palin, not easy to caricature on SNL. The moral dilemma is awful, to be sure. American forces have battled radical Islamist warlords in the backward country of Sangala (aka Somalia), but are threatened with horrific domestic consequences if they do not withdraw after security in American information technology infrastructure is hacked.

Taylor makes a lot of the prospect that native women and children will perish if American forces withdraw. But the threat is a CIP device in the US which would bring down all planes (having breached FAA computers) and possibly worse, suggesting a possible EMP attack. Although the fictitious country here is a small African "failed state", the "between the lines" implication seems to invoke a grim possibility that conservative columnists mention in connection with Iran (and remember, Fox is supposed to be a "conservative" media company politically).

Now all of this is suggestive, but inconclusive. There is a lot of criticism of FAA computers as being old (even with vacuum tubes) and proprietary; they could hardly be hacked from the Internet. In fact, one of Obama’s infrastructure priorities would be to upgrade the FAA Air Traffic Control System (and associated employment) to 21st Century standards. Furthermore, Pentagon and intelligence computers would not have any connection to the Internet (or would they, for reverse spying). And military computers are supposedly hardened with Faraday devices to protect them from EMP. So the whole scenario sounds implausible. It would be a bit like saying, if I disconnected my own computer from broadband and disabled the wireless card, a sleuth could still tell what I am typing with some sort of satellite overhead. I have heard people say that is possible.

Colm Feore is absolutely chilling as Henry Taylor, and you almost expect him to say “Give me what I want and I’ll go away” (from “Storm of the Century”).

An earlier season presented a fictitious first black president, Wayne Palmer (D. B. Woodside). Each season is separated by some months from the previous one, and many different scenarios have been developed. In one season (when Palmer was president), a small suitcase nuke was detonated in suburban Los Angeles, with 12000 deaths, and there was a threat to set off more of them. In another there was a deadly new virus. Palmer actually has to ask a character to sacrifice himself. There is also a sequence involving a teenage son’s trying to save his father.

Earlier in the Season 7 premiere, there was a curious variation on the standard polygraph (given to highly cleared employees even if not admissible normally), with some implied intimidation or humiliation. The female examiner says, “I’m going to have to lift up your shirt” and applies electrocardiographic electrodes (no shaving). What follows is some illegal rendition, that can become life threatening indeed.

But I suppose that a future episode could use the MRI lie detector (Cephos and No Lie MRI), as discussed in this reference.

Picture: Nellie’s on U St in Washington DC (my photo, early 2008). “24” has a lot of outdoor neighborhood shots, and I thought I caught a glimpse of Nellie’s.

P.S. Peter Bergen has been discussing the "rehabilitation" of ex-jihadists in Saudi Arabia, Indonesia and even Singapore, on CNN today.
Posted by Bill Boushka at 2:25 PM