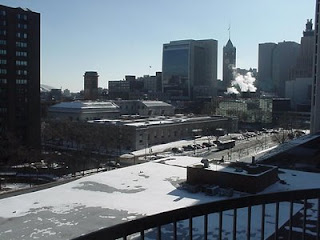 Ryan R Rudd has a video “Fargo Flood 2009: Day 4 Montage” which he says was shot at a distance and kept silent because emergency workers asked them to keep a distance. There is a shot of a sign “more sandbaggers needed”. Practically every able bodied person Moorhead and Fargo has been volunteering. (“Sandbagging” is a derogatory word in chess tournaments, throwing games to weaker opponents – a curious word indeed.) If I were still living in the Twin Cities (Minneapolis St Paul) I wonder if I would still be hearing calls for volunteers to go the 200 miles to work on the dikes.

“Fargo Flood Rising above Predecessors” is a USA Today produced video (2 min) on YouTube that compares the flood today in Fargo ND with the 1997 Grand Forks flood.

The Red River flows North (it is above the “Laurentian divide” or “Triple Divide” see “National Atlas” here for discussion). This year, there was an early hard freeze in October and early snow, and then some early melting. The melting starts farther south, which makes the flooding from Fargo to Grand Forks and into Canada worse. Grand Forks (farther north) had a severe flood in 1997 (shown in this film) and fire, shortly before I moved to Minneapolis myself. I visited the Grand Forks area in September 1997, and Fargo a few times in the next six years. I spoke at Moorhead State University about my book in November 2000. Because of the 1997 incident, Grand Forks got more money to build bigger dikes, but Fargo was insufficiently protected.

CNN reported today that a particular neighborhood in Fargo ND has been walled off by dirt dikes and might be “sacrificed” to save the rest of the city. Even homeowners in the area, about 42 feet above the Red River, accept the necessity of this sacrifice.

The latest news from CNN (noon Saturday March 28, 2009) is that the worst crest may stay below 42 feet, but this bears watching on the media constantly today through the weekend.

Tad Agoglia was interviewed in Fargo (by CNN); he mentioned is "First Response Team" website here.

Many people remember that “Fargo” was the title of a famous Coen Brothers black comedy film from Miramax, which takes place in Minnesota and North Dakota.

(Original picture: Downtown Minneapolis, MN, winter 2003, from the Churchill Apartments).
Posted by Bill Boushka at 8:41 AM