PBS Frontline reports on Ebola, Marburg viruses tranmitted between animals and humans in Uganda; also, death of a Tehran protestor 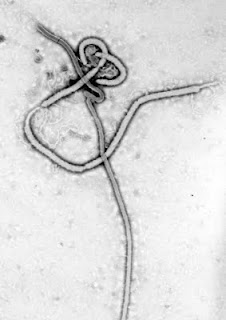 On Tuesday Nov. 17 PBS Frontline World presented a 13-minute report “Uganda: Out of the Wild” about the spread of novel viruses from animals to human, and back.

Someone got Marburg virus (a hemorrhagic fever ) from visiting a cave (with bats), and others got Ebola virus from eating infected meat. Robert Preston had covered this diseases in his book “The Hot Zone” in the early 1990s, and Laurie Garret has written about them.

Ebola and Marburg are related, and were a major epidemic to occur in a western environment, it would provoke a crisis. The symptoms are gruesome, with skin and organs breaking down ("liquefying") and the disease is usually fatal or crippling, with transmission by all “body fluids”. It is more transmissible than HIV (but not transmitted through air, probably).

Gorillas also developed total alopecia from minor human skin infections. Humans and other primates share about 98% of their genes, so it would be expected that many viruses would cross over. HIV probably came from other primates.

The link for the story is here.

The first 40 minutes covered “A Death in Tehran” , about Neda Agha Soltan who was shot in June during the protests in Iran. The Tehran government actually wanted to make her parents a fake offer of “martyr” status.
Here is the synopsis.