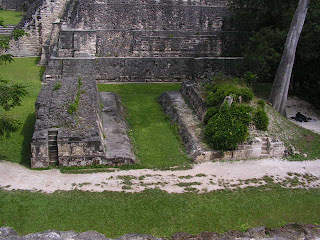 The History Channel is sponsoring “Apocalypse Week” to start January 2010, and Sunday night it ran “Apocalypse Island”, a two hour documentary. The link is here.

This island is about 400 miles west of Chile, hard to reach because of violent currents most of the year. In 1995, a researcher and outdoorsman Jim Turner fell while hiking on the island. Only slightly injured, when he stopped he noticed a Mayan-like stone megalith.

Research over the years showed that the megalith could be a particularly appropriate place to watch the solar eclipse 40 days before Dec 21 2012, as well as the transit of Venus. Some historians believe that the Mayans traveled to the South American coast, introducing corn, as well as North America, maybe influencing the mound builders in Ohio.

The Mayan calendars circled back, but shows now future after that day, at the end of a 5000+ year calendar cycle

In the second half of the film, Turner and a companion return to find and climb the megalith, and look for the “secret of 2012”. The megalith is perfectly elevated to see the events from June to Dec 21, 2012 as predicted by the Dresden Codex.

The Mayans knew about the "Great Dark Rift" when the solar system components are aligned with the center of the Galaxy. The Dark Rift is the Center of the Milky Way, where a supermassive black hole lives. We had a similar event 13000 years ago with a sudden climate change.

A good comparison is MelGibson’s 2006 film for Touchstone, “Apocalypto”. .
Posted by Bill Boushka at 7:53 PM

If the Mayan were so good at predicting the future, why couldn't they predict there exstinction