"Panic Attack" is Uruguay's "Cloverfield"-- maybe a deal with Hollywood 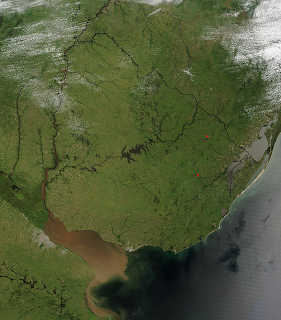 The scuttlebutt in the media is that the film short “Panic Attack!" by Fede Alvarez about a robot attack on Montevideo, Uruguay, has drawn the interest of director Sam Rami, Ghost House, and I guess Sony Pictures. A little boy sees the robots approach a bridge, and pretty soon they launch a laser attack on the city. Supposedly the film cost just $300. I post it on the “disaster movies” blog because it reminds me of Cloverfield (reviewed Jan. 2008). Here’s the story by Matt Goldberg on Collider, link.

There are many variations of the video on Youtube, such as this.

Wikipedia attribution link for NASA image of Uruguay.
Posted by Bill Boushka at 8:57 AM