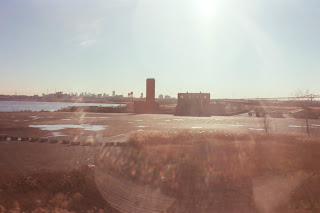 Since I’ve reviewed some recent films about pandemics, some less credible than others (whether or not government-created), I thought I’d remind the visitor of the 2002 film from Britain for the FX network by Dan Percival, “Smallpox 2002: Silent Weapon”. The film starts with a lone infected visitor in the New York subway and in three months the world has a shocking epidemic killing millions and destroying the economy. The government tries diluting the vaccine (a trick tried in the early days of H1N1). A few characters are followed, and some, such as a teenage boy who goes to London, come to a tragic end.

In the film, the “guilty party” is a loner, not part of Al Qaeda.

The film makes a powerful argument for the idea that we ought to renew smallpox vaccinations as routine.
Posted by Bill Boushka at 8:01 PM

The only "point" that I've been able to see others make about this film is renewing vaccinations. I think a far more relevant point is what life will be like for a while when there is ANY legitimate widespread panic. Whether it's the economy going belly up or a pandemic of any really deadly disease or revolution. Fear leads people to behave in ways they otherwise would not. Many will hunker down to try to wait it out. Absenteeism on many jobs will increase, leading to supply shortages ranging from food and gas to infrastructure like water and sewage. Services become stretched. Service providers will also be vulnerable, limiting their resources further - some of them will, naturally, also be vulnerable to wanting to stay home and take care of their own, stretching them still further. Shortages will lead to people to start getting what they need in ways they wouldn't normally (stealing). That'll lead those who have to protect what they have. All of this and more will lead to crackdowns. That'll get some people to fight back. Fears and suspicions about who gets what and what's being held back and so on just make it worse. It just becomes a downward spiral as things fall apart and, of course, any government is going to do its best to try to control damage and chaos. All that control just panics and maddens people still more (especially in more westernized countries where we are used to freedom rather than violently exploitative and corrupt governments).

For all the people who say "it couldn't happen here," this movie portrays a very realistic picture of "yes, it can." It's a good commentary on how we should be very aware of the good things that government will try to do but also how we will become a bunch of sheep to be driven as the shepherd wishes if some kind of you know what hits the fan.

I concur, which is why I review movies like this on a separate blog (for now). I wish more visitors took films like this seriously and would provide detailed comments!! Thanks.

The one thing that I really didn't like about this movie is that, in the end, they just had to make the nutjob a radical Christian. The world has had real terrorists of various ilks for decades, some of whom have been escalating their activities of late to the degree that we are truly afraid of widespread attacks of unknown nature - nuclear, chemical, biological, even just plain old fashioned invasion (remember Red Dawn)? It is possible. So why did they have to make the culprit someone from a group from whom we have not been experiencing terrorism. Great movie but I ended up with an annoyance that it was made by a Christian apologist.

By the way, where is this separate blog you referred to where you are reviewing movies like this?

Just look at my Blogger Profile that has links to other blogs (a movie reviews blog, TV reviews, book reviews). You can also go to doaskdotell.com (mine) and find the links to all the blogs in the middle of the home page.

I am thinking about a scheme to integrate these better.