PBS: "The Storm that Drowned a City" and "the Hurricane of 38" 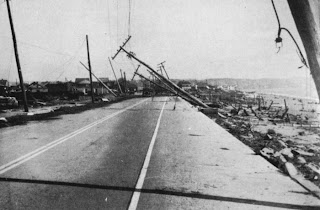 Some PBS stations (WETA 26 in Washington) aired the 2005 NOVA program “The Storm that Drowned a City”, giving an almost Biblical chronicle of Hurricane Katrina’s flooding of New Orleans. The link is (web url) here. Many residents in the downtown area north of the French Quarter went to bed Monday night thinking they are safe, and woke up in the middle of the night as the Love and 17th St Canals broke, admitting five feet of water. The documentary shows the hundreds of people stranded, as in the Superdome where Oprah would visit.

Then MPT (Annapolis) aired “The Hurricane of ‘38”, link here, from the "American Experience" series "The 30's".

The black-and-white documentary shows how residents of Providence RI were oblivious to the approaching storm in September 1938, concerned mainly about the Depression. The sky turned yellow before the storm came, according to one elderly (now) observer, who said that it made her feel like the only living thing in the world, as the birds grew quiet.

The film covers the effect on New York City (65 mph winds), and eastern Long Island, where (in the wealthy communities) it was much worse. With telephone lines down, communications were very poor.

The hurricane did a lot of damage even inland in New England, which was shocked that a hurricane of this size could go so far north. The Weather Bureau denied responsibility for the 700 deaths.

Wikipedia attribution link for NOAA picture of Rhode Island damage.  I last visited the area myself in January 2003.
Posted by Bill Boushka at 6:56 PM