"Asteroid Attack" on "The Universe" on "History Channel" 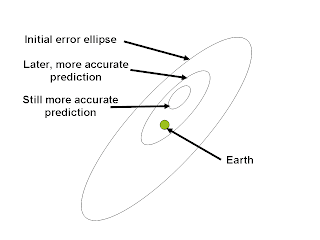 The Universe episode “Asteroid Attack” aired on Sept 2, 2010 on the History Channel’s “The Universe” series, directed by Ron Beemer.  Again, "The Universe" is starting to replace "Mega-Disasters".

I wasn’t aware that the Chesapeake Bay, along the East Coast, was created by an asteroid 30 million years ago, striking above what is Norfolk today; the crater was found in the 1990s with underwater oil exploration. The tsunami wave may have crossed the Appalachians. Rocks from the explosion are located along the coast.

With most asteroids large enough to do huge damage, there would be years or decades of warning. Comets, on the other hand, because they come from the outer reaches of the Solar System, are not seen until perhaps six months before they could strike.

The largest impact crater in the world is in South Africa, about 180 miles across, with a rebound peak in the middle.

The Obama administration has made exploring asteroids a priority. Larger one have some tectonics and may have internal ices, and enough gravity to hold a spaceship. One unmanned probe has landed in Australia with a sample of an asteroid.

In 1972, amateur filmmaker caught an asteroid skimming the top of the atmosphere over the Tetons.