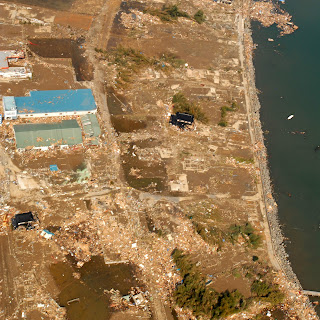 CBS News has a 3 minute film “Are America’s Nuclear Plants Safe”, on youtube, here embedding disabled. California has two coastal nuclear plants: Diablo Canyon and San Onofre, but the plants were designed to hold to only a 7.0, not a 9.0.   They also don’t use GE’s design, which may have smaller containment vessels.
It’s not all that reassuring.
Here’s a chilling 8-minute look at Chernobly and Pripyat. It’s called “Chernobyl: The Abandoned City”. It mentions the sacrifice of workers to tried to control the effects of the blast. In Japan, older or retired men may be asked to “volunteer” to work on the reactor because they do not have as long to live even without radiation.
These videos may work best in Internet Explorer (to get the right aspect ratios).
There was also an Oscar-nominated short film about Chernobyl named "The Door", reviewed on my movies blog, March 2, 2010.
Wikipedia attribution link of tsunami damage picture
Posted by Bill Boushka at 8:45 PM