ABC 20-20: "The Girl Left Behind": The story of the murder of ISIS hostage (from Doctors without Borders) when US government would not allow parents to pay ransom to foreign terrorists 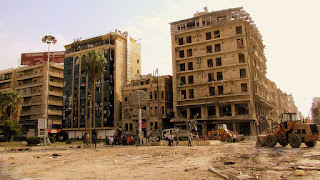 ABC 20-20 aired a sickening story of Kayla Mueller, titled “The Girl Left Behind” tonight, Aug. 26, 2016.  Kayla had been kidnapped by ISIS in Aleppo, Syria in August 2013 while on a mission for Doctor’s Without Borders.   ABC’s best link seems to be this.

Her captivity became a battle over whether the US government (or any party) must sacrifice individuals to avoid negotiating with terrorists (Israel’s policy).  The US refused to let the Mueller family raise money for ransom, although it has since change its position.  And the government has negotiated, for example, with the Taliban for its own soldiers.

The documentary told a complicated story involving even attempts to get Qatar to act as a broker.  The report aired the sickening extortion emails from ISIS, as well as the reported “marriage” to Au Bakr al-Baghdadi.

The administration now says that negotiation is allowed if part of a scheme to set up future stings.
The report also describes a failed raid by Special Forces.

One objection to allowing a family to pay ransom to foreign terrorists is that a family could use social media campaigns to ask for private donations from citizens (possibly “pressuring” other individuals socially) that would go to terrorists, further setting up a precedent for future kidnappings.  My own “policy” is never to be singled out and taken hostage by anyone, whether an ordinary criminal or a domestic or foreign terrorist.  In my own mind, sacrifice happens, and life goes on.  We sacrificed young men with military draft, and life went on for the rest of us.  There is no way to make this right. My own life must never become a bargaining chip in somebody else's negotiation or for a ransom-raising campaign.  The only honorable end is death in that case.  Further details are here.

ABC Nightline repeated part of the report and added tributes to Kayla from others who were released.

Wikipedia attribution link for picture of destruction in Aleppo