"The Jihadis Next Door": British filmmaker interviews some of the UK's most notorious radical Islamists 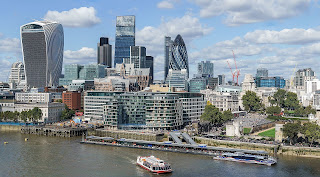 In the Channel 4 short (46 documentary) “The Jihadis Next Door” (20160, British filmmaker Jamie Roberts interviews a fundamentalist radical preacher Abu Haleema, and bouncy castle salesman Abu Rumaysah now one of the world’s most wanted men.  He also explores the possibility of similarity of one of the men’s voices to “Jihadi John” in the ISIS beheadings.

Both men (it’s hard to tell them apart) espouse the idea that Britain should live under Sharia law.  They claim everyone will live well if obedient to Allah, but people who refuse will have their property and lives taken from them by force.  The preacher is pretty blunt about this.  He also claims civilians deserve to be treated as  combatants, because individual Muslims in the Middle East are attacked by the British.

There is a major descriptive link for the film here.

Toward the end, the documentary shows a brief clip in Paris after the November 13, 2015 attacks.

You get the feeling that combativeness of radical Islam is driven in part by a desire not to deal with people “as they are”.

New York Times connects this film to the perpetrators of the 6/3/2017 attack in London.

Posted by Bill Boushka at 3:47 PM No comments: