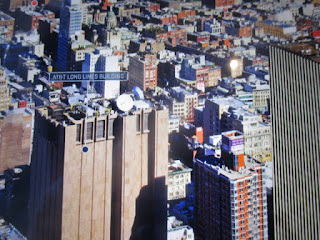 I’m not a big fan of Blindspot, an NBC domestic  spy series based on an unidentified tattooed woman (Jaimie Alexander) found in Times Square.

But an episode Wednesday night, “Borrow or Rob”, did hit a lot of major risks.  A cabal based on a college fraternity seems to have developed a mathematical algorithm to calculate the best day to start world revolution.


The revolution apparently includes ruining the real estate values of much of America with dirty bombs.  It’s an idea that sounds chillingly plausible.  Donald Trump, given his real estate career centered on property rights and "air rights",  would have more incentive to “keep us safe” from such an idea than anyone else.  But this scheme seems to be domestic and based on 70s style terror, not foreign. Immigration bans would be irrelevant.

The “cult”, for what it was worth, with the pinko gowns, rather reminded me of the 1999 film “Eyes Wide Shut”.